Sirinu is an ensemble of early instruments and voice, with an established reputation for lively and communicative performances based on sound musical scholarship. Since their formation in 1992 they have recorded for Hyperion and Chandos, and appeared at festivals and Early Music Networks throughout Europe, North Africa, and South America. They also commission new pieces for early, folk, and non-mainstream instruments and combinations, and enjoy using unusual instruments and exploring the connections between different folk traditions. They are beginning a tour of new music commissions in 2017.

‘A tour de force of sound, colour, movement and dance…energetic and virtuosic…this exhausting and extrovert concert was not only extremely original and convincing, but also great fun’ [Early Music News] 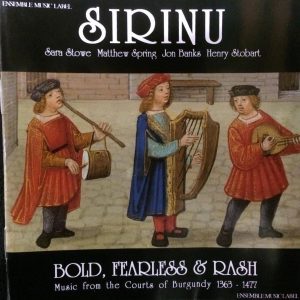 A promenade concert inspired by space and the planets from the Middle Ages to the present, with projections from Oxford’s Museum of the History of Science, and including a new music-theatre commission by Martyn Harry. See programmes for more information.7

“THE WHITE ROSE AND THE CROSS” coming soon, featuring music from the sumptuous court of Margaret of York and Charles the Rash, which celebrates their marriage 550 years ago.  As featured on Sirinu’s CD ‘Bold, Fearless and Rash’.

THE MAN HURDY-GURDY & ME

CD release of The Man Hurdy-Gurdy and Me (Métier Music)